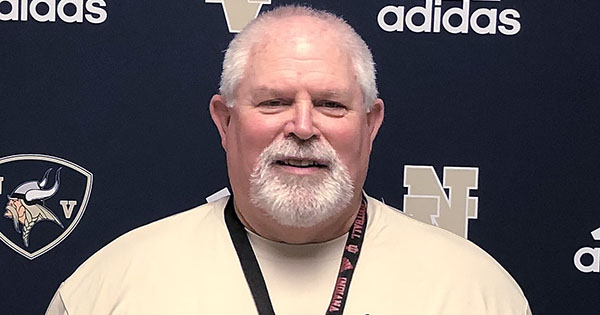 Shaw replaces Joe Sassano, who retired after last season, and Cody French, who was hired in March but resigned to take another position in Indiana in April.

Shaw is a former Three Rivers football coach who led the Wildcats to the 2003 Division 4 state championship with a 24-6 victory over DeWitt. Shaw’s Three Rivers teams were perennial Wolverine Conference contenders throughout his 20-year career.

Niles will join the Wolverine Conference in the fall. The Vikings open the 2021 season hosting Sturgis Aug. 26. Niles will host the Wildcats on Sept. 17.

Shaw also coached at Grandville, Hope College, Fort Wayne (Ind.) and Elkhart Memorial (Ind.) He did not coach during the 2020 season.

“Sitting out last season was very frustrating for me,” Shaw said. “I realized I loved football, and I am a football coach. I am very excited to take over the Viking program and work to increase the football IQ of both the players and the staff. I am also very excited to see the success of our middle school football program and look forward to working with our coaches and players to bring success on the field for our community.”

“I am very excited for what our future holds with Scot running our football program,” Brawley said. “Scot is a proven winner, and he knows how to win in the Wolverine Conference. He brings a vast array of knowledge and experience to help improve our football program.”

Upton was pleased to see that Shaw likes to evaluate his players before deciding how to put them in the best position to excel.

“What impressed me most about coach Shaw was that he adjusts his systems depending on the talent in the program,” he said. “Matt and I both are excited to bring coach into our athletic department. As Matt stated, coach has won at every level and every program. Our Viking community is ready for a winner, and with our young talent, we both believe coach Shaw will bring victories to our Niles community.”

Shaw is excited about coaching against the Wolverine Conference schools, although most of the coaches are no longer on the sidelines that he competed against.

“It is kind of ironic because, for years at Three Rivers, I opened with Sturgis, and we are opening with Sturgis now,” he said. “Back then, that was a big game, and it will be again because it will be our first chance to show what we are. I am looking forward to that. I am looking forward to being in the Wolverine. I know the Wolverine really well, but I don’t know many people still there, but the road trips I know.”