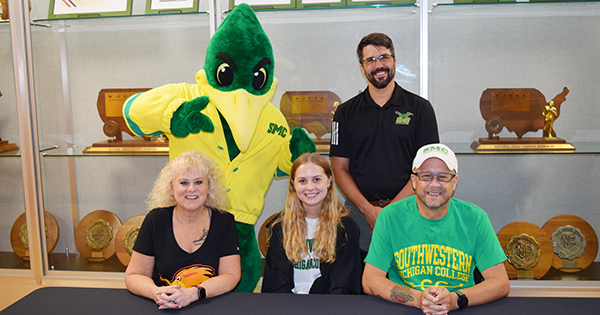 Abby Lee is flanked at the signing in the Recruiting Gallery of the Student Activity Center on the Dowagiac campus by her parents, Gregg and Krista Lee, President Dr. Joe Odenwald, Head Coach Zac Sartori and mascot Ronnie Roadrunner. (Submitted photo)

DOWAGIAC — With the first practice weeks away, a flock of Roadrunners is nesting at Southwestern Michigan College.

Appropriately, such an avian assemblage is called a “marathon” or “race.”

Makayle Weedon of Paw Paw will help manage the team.

Lee is already well-established at the college. This summer she moved from Keith H. McKenzie Hall to Thomas F. Jerdon Hall to begin her duties as a resident assistant. Jerdon residents are a bit more arts-oriented. Lee played violin in a symphonic orchestra, “but I can barely draw a stick figure.”

After graduating from Concord in 2018, she selected SMC with the expectation of studying nursing, but transitioned into an allied health program, Health Information Technology. She expects to receive her HIT associate degree in May 2022, with an internship next summer. “I’ll be able to work anywhere there are medical records, whether it’s a law office doing medical cases or a veterinarian’s office.”

Lee has been well-advised since she started running cross country in seventh grade. Her father is the Concord Minutemen’s assistant coach. Both her parents’ jobs connect to health care.

“I was always interested in anything medical and in helping people,” Lee said. “Growing up, my grandparents took care of me. I wanted to be able to repay that through other people’s grandparents.”

The middle of three daughters, Lee said both sisters, Tara and McKenna, are “a little bit better than I am. My personal best was around 24 minutes for a 5K. That’s one thing I like about cross country. We’re all one team, no matter how fast or how slow you are. Having a dad who is a coach is nice. He’s given me good advice, but it can be stressful. On vacation in Florida, he had us out there running as the sun rose.

“I’m most looking forward to having that team bonding again with a good group of people you can go to. I felt bad for those whose graduations were affected by the pandemic, but for me it was, ‘I’m online for classes now.’”

A chance meeting led her to join the team.

“I happened to be in McKenzie Hall when coach came through,” she said. “I blurted out, ‘I used to do cross country in high school.’ He said, ‘Oh really. I’m looking for more women for the team.’ I know when I first came to SMC I was a little sad there wasn’t a cross country team because I’d basically spent my whole life running. I thought about IUSB or Goshen College, which I know has a cross country team. But SMC’s a really good school and I felt more at home here. Plus, my dad took a few classes here back in the day.”