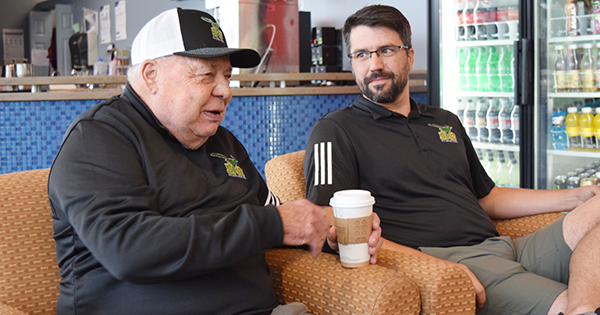 DOWAGIAC — Besides acknowledging a $5,000 gift to Southwestern Michigan College’s new Recruiting Gallery, the trophy hall displaying the Roadrunners’ national titles and All-American accolades, July 16 will go down in SMC history as an auspicious date.

The face of SMC Athletics for four decades and the founder of Steve’s Run, Gunn retired in 1996 as the winningest coach in junior college cross country, with five national championships, three national marathon championships, 23 Michigan Community College Athletic Association cross country and 18 National Junior College Athletic Association Region XII track championships. His teams finished in the top 10 nationally 28 times in 29 years. Gunn coached at the international level in Ireland in 1979 and in Germany in 1981.

Gunn coached 25 individual national champions, with 142 of his student-athletes earning All-American. He was voted national coach of the year five times and was inducted into both the NJCAA Cross Country Coaches Hall of Fame in Colorado Springs, Colorado, and the National Track Hall of Fame in Charleston, West Virginia.

Sartori asked about the origin of Gunn’s trademark, “Fire Up!” Gunn always pumps his right fist as he says it because it has to do with railroad steam engines old enough to need their boilers “fired up” with wood or coal.

“It was a silent message I could send when the kids were out on a run that I’m with you and keep up the great work,” he said. “It really caught on, but I got it from trains.”

“I want to make sure I carry on the appropriate traditions,” Sartori said.

“I’ll help you all you want,” Gunn said, “but I’m not going to intrude on you. You’ve got a great smorgasbord of training venues,” from rugged Lawless Park near Vandalia “all the way” to Lake Michigan’s sandy beaches. “I developed some 40 courses and named them after All-Americans.” They agreed to take a drive soon to acclimate Sartori to those training options.

Gunn, a quarterback and defensive back, was best known for football before coming to SMC in 1967 to establish athletics. Dailey was still a gravel road back then.

At Moline High School in Illinois, Gunn was captain of the football and track teams. He held the school record in the mile and was a member of the 1960 state championship track team.

Gunn played collegiately at Augustana College in Rock Island, Ill., where he quarterbacked the Vikings football team and co-captained track, which won its first conference championship in many years.

Sartori and Gunn share a love for Dowagiac as well as Illinois roots.

Sartori ran for the University of Arkansas-Fayetteville and Loyola University-Chicago. He earned a bachelor’s degree in kinesiology and a master’s degree in sport and exercise psychology from Northern Illinois University.

His wife, Kate, a former distance runner — they wore running shoes at their wedding reception — holds a doctorate in physical therapy from Carroll University in Waukesha, Wisconsin.