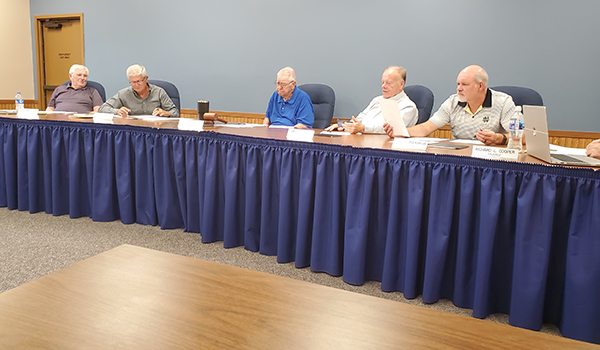 Last Thursday, the board hosted a special meeting, during which board members approved a large-scale document scanning project, which would convert the township’s paper files to digital, with Graphic Sciences. The project, which was estimated to cost $8,253, would scan and create digital copies of an estimated 31,005 images, 5,200 drawings and 7,241 files.

According to Lisa Herter, of the township building department, the document scanning project would help clear out years-old paper copies and make it easier to find important documents when staff or the public wishes to view them.

“What we are really trying to look at is cleaning up the basement,” she said during Thursday’s meeting. “It’s horrible down there. Every time we get a FIOA request, every time somebody wants to look at plans — like how someone wanted to look at the plans for the old Dairy Queen the other day — there’s no way we can find those plans.”

“It can take hours upon hours to go down there to do stuff,” added Denise Kasprzak, zoning administrator.

Though board members approved the Graphic Sciences proposal during Thursday’s special meeting, they changed direction by Monday. During the regular meeting, the board rescinded Thursday’s vote and moved to collect additional proposals from other companies.

Trustee Herschel Hoese said he felt Thursday’s vote was rushed and that Graphic Sciences’ proposal did not include all the documents board members and township employees believed it did.

Hoese said he wants to include file cabinets in the upstairs of the township building in addition to the files in the building’s basement.

“We’ve waited 30 years to do this, so I don’t think another few weeks are going to make a difference,” he said. “It’s best that we get done what we thought would get done and bring it back to the board with two or three bids.”

The motion was approved in a unanimous vote.